Five (5) winners will be selected each quarter (for a total of 20 winners) from all of the eligible entries received. Employees, directors, and officers of Skillastics®, Skillastic’s affiliates, and each of their respective advertising and promotion agencies (collectively, “contest Entities”), and their immediate family members and/or those living within the same household of each are not eligible to enter or win. Contest is subject to all applicable federal, state and local laws and regulations. Void where prohibited by law.

HOW TO ENTER: To enter the contest, visit to submit WRITTEN or VIDEO testimonial

If you are an existing user of Skillastics®, share a success story you’ve had with Skillastics®.

Limit one (1) entry per person. Any additional entries received from any person in excess of this limitation will be voided. To qualify for the contest, entries must be submitted within the contest Entry Period.

The contest winners will be notified via a Facebook message from the Skillastics Facebook account around the dates mentioned above. The winner will have twenty-four (24) hours to respond. If the potential winner does not respond to the winner notification message within twenty-four (24) hours, or if said message is
returned as undeliverable, or if an entrant is otherwise found to be ineligible, or if a selected winner cannot accept or receive the prize for any reason, the potential prize  winner will forfeit the prize and an alternate winner will be selected. Sponsor reserves the right to modify the notification procedures in connection with the selection of an alternate winner, if any. Prizes are non-transferable and no substitution by any winner
or cash equivalent is allowed. Sponsor will not replace any lost, misplaced or stolen prizes.

Each prize winner understands, acknowledges, and agrees that the winner is receiving a prize and will hereby release and discharge Facebook, Skillastics®, Skillastic’s affiliates, and each of their respective employees, agents, officers, directors and legal representatives and assigns from any and all claims, liabilities,
damages, losses or expenses arising from or caused by the award of such prize, including, but not limited to, the payment of any and all taxes that are due. Entry in the contest and/or acceptance of a prize constitutes permission (except where prohibited by law) for Skillastics® to use each entrant’s or winner’s name, image,
likeness, biographical information, school or organization you work for, and (if applicable), prize won, for marketing and promotional purposes, including, without limitation, on websites and social media posts, without further compensation

GENERAL: Entrants agree to these Official Rules and the decisions of theAdministrator and Sponsor, and on behalf of their respective heirs, executors, administrators, legal representatives, successors and assigns (collectively, “Releasing Parties”), release, defend and hold harmless Facebook and the contest Entities, as well as the employees, officers, directors and agents of each (collectively, “Released Parties”), from any and all actions, causes of action, suits, debts, dues, sums of money, accounts, reckonings, bonds, bills, specialties, covenants, contracts, controversies, agreements, promises, variances, trespasses, lost profits, indirect or
direct damages, consequential damages, incidental damages, punitive or exemplary damages, judgments, executions, claims and demands whatsoever, in law, admiralty or equity, whether known or unknown, foreseen or unforeseen, against Released Parties which any one or more of the Releasing Parties ever had, now have or
hereafter can, shall or may have, which in any way arise out of or result from entrant’s participation in the contest, acceptance and/or use or misuse of any prize. In the event Sponsor is prevented from continuing with the contest as contemplated herein by any event beyond its control, including, but not limited to, fire, flood,
hurricane, earthquake, explosion, labor dispute or strike, act of God or public enemy, satellite or equipment failure, riot or civil disturbance, terrorist threat or activity, war (declared or undeclared) or any federal, state, or local government law, order, or regulation, or order of any court or other cause not within Sponsor’s control or
concerns regarding the safety of any entrant, Sponsor shall have the right to suspend   or terminate the contest. Sponsor reserves the right to change these Official Rules at any time, in Sponsor’s sole discretion. Entrants acknowledge that the contest is in no way sponsored, endorsed, administered by or associated with Facebook.

Entrants assume all liability for any injury, including death or damage caused or claimed to be caused, by participation in this Contest or use or redemption of any prize.

This contest shall be governed by and interpreted under the laws of the state of California, U.S.A., without giving effect to its conflict of laws provisions. Entrants hereby agree that any and all disputes, claims, causes of action, or controversies (collectively, “Claims”) arising out of or in connection with this contest shall be
resolved, upon the election by entrant or Sponsor, by arbitration pursuant to this provision and the code of procedures of either the National Arbitration Forum (“NAF”) or the American Arbitration Association (“AAA”), as selected by the entrant. IF ARBITRATION IS CHOSEN BY ANY PARTY WITH RESPECT TO A CLAIM,
NEITHER PARTY WILL HAVE THE RIGHT TO LITIGATE THAT CLAIM IN COURT OR HAVE A JURY TRIAL ON THAT CLAIM. FURTHER, NEITHER SPONSOR NOR ENTRANT WILL HAVE THE RIGHT TO PARTICIPATE IN A REPRESENTATIVE CAPACITY ON BEHALF OF THE GENERAL PUBLIC OR OTHER PERSONS SIMILARLY SITUATED, OR AS A MEMBER OF ANY CLASS OF CLAIMANTS PERTAINING TO ANY CLAIM SUBJECT TO ARBITRATION. EXCEPT AS SET FORTH BELOW, THE ARBITRATOR’S DECISION WILL BE FINAL AND BINDING.NOTE THAT OTHER RIGHTS THAT ENTRANT WOULD HAVE IF ENTRANT WENT TO COURT ALSO MAY NOT BE AVAILABLE IN ARBITRATION. The arbitrator’s authority to resolve Claims is limited to Claims between Sponsor and entrant alone, and the arbitrator’s authority to make
awards is limited to awards to Sponsor and entrant alone. Furthermore, claims brought by either party against the other may not be joined or consolidated in arbitration with Claims brought by or against any third party, unless agreed to in writing by all parties. No arbitration award or decision will have any preclusive effect
as to issues or claims in any dispute with anyone who is not a named party to the arbitration. Notwithstanding any other provision in this Agreement, and without waiving either party’s right to appeal such decision, should any portion of this provision be deemed invalid or unenforceable, then the entire provision (other than
this sentence) shall not apply. Sponsor is not responsible for any typographical or other error in the printing of the offer, administration of the contest or in the announcement of prizes. Entry materials/data that have been tampered with or altered, or mass entries or entries generated by a script, macro or use of automated
devices are void. Sponsor is not responsible for: (i) lost, late, misdirected, damaged, or illegible entries; (ii) error, omission, interruption, deletion, defect, delay in operations or transmission, theft or destruction or unauthorized access to or alterations of entry materials, or for technical, network, telephone equipment,
electronic, computer, hardware or software malfunctions of any kind, or inaccurate transmission of or failure to receive entry information by Sponsor on account of technical problems or traffic congestion on the Internet or at any website or any combination thereof; (iii) any injury or damage to entrant’s or any other person’s
computer related to or resulting from participating in the contest, or (iv) the failure of any third party to comply with the instructions and proper administration of this contest. By participating in the Contest, entrants (i) agree to be bound by

these Official Rules, including all eligibility requirements, and (ii) agree to be bound by the decisions of Administrator, which are final and binding in all matters relating to the contest. Failure to comply with these Official Rules may result in disqualification from the contest. Sponsor reserves the right to: permanently disqualify from any contest it sponsors any person it believes has intentionally violated these Official
Rules; and terminate the contest if it becomes technically corrupted (including if a computer virus or system malfunction inalterably impairs its ability to conduct the contest), or to select winners from among all eligible entries received prior to termination. LEGAL WARNING: ANY ATTEMPT BY AN INDIVIDUAL, WHETHER OR NOT AN ENTRANT, TO DELIBERATELY INTERFERE WITH THE OPERATION OF THE contest, MAY CONSTITUTE A VIOLATION OF CRIMINAL AND CIVIL LAWS AND SPONSOR RESERVES THE RIGHT TO SEEK DAMAGES AND DILIGENTLY PURSUE ALL REMEDIES AGAINST ANY SUCH INDIVIDUAL TO THE FULLEST EXTENT PERMITTED BY LAW.

DATA COLLECTION/PRIVACY POLICY: Entry in the Contest constitutes consent by you to the collection and transfer of your personal information for purposes of administration of the Contest by Sponsor and its authorized agents, and for such other purposes to which you may consent, or as otherwise described in these
Official Rules. All information submitted to Sponsor as part of this contest will be treated in accordance with Sponsor’s Privacy Policy
(https://www.Skillastics.org/privacy). 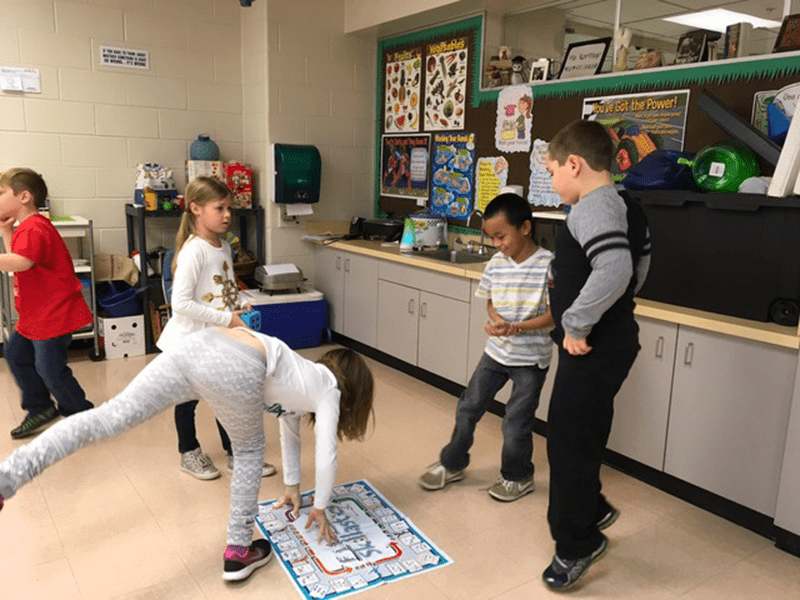 Get rid of frustration and confusion with this simple, straightforward FREE guide that will help you easily organize and safely engage large groups of children in no time flat.

Get Your FREE Guide Now
We use cookies to ensure that we give you the best experience on our website. If you continue to use this site we will assume that you are happy with it.OkPrivacy policy